Welcome to the interactive digital shelf where you can browse the museum's Archaeology displays to learn more about each item and their history.

Select one of the cabinets below to get started! 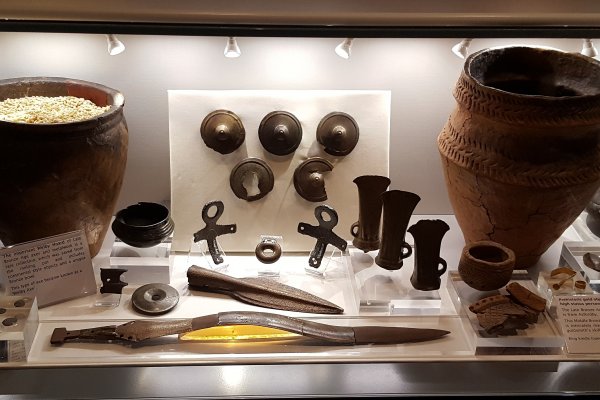 Prehistory is a vast time period with some of the earliest evidence for occupation in the Melton area being found at Brooksby in the form of Palaeolithic stone tools which could be up to half a million years old. People lived a nomadic hunter gatherer existence during the Palaeolithic and Mesolithic until the Neolithic when they settled, clearing the land for farming around 4,000 BC.

The majority of prehistoric finds consist of flint and stone tools even after the introduction of bronze tools in the Early Bronze Age around 2,500 BC. Gold objects are extremely rare and would have only been owned by the elites of society. Everyday common items made of wood, antler and bone rarely survive.

The most prominent Iron Age site in Leicestershire is the hillfort at Burrough Hill. It was during this period, from around 700 BC, that objects began to be produced in iron and coinage developed. 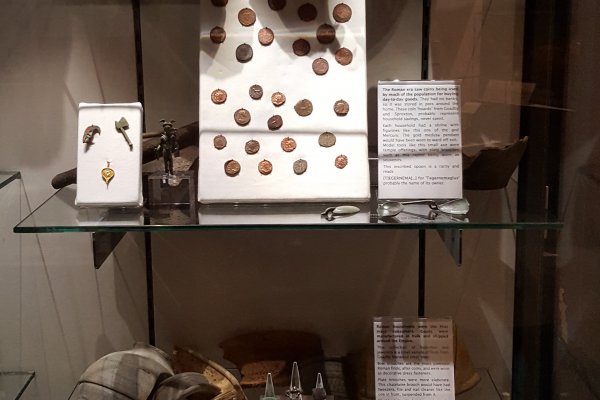 The Romans successfully invaded Britain in AD 43 under the Emperor Claudius and quickly established forts and settlements across Britain. In some areas where there were Iron Age settlements, these continued to be inhabited and developed during this period such as at Burrough Hill.

The Roman period is very well represented by archaeological finds, partly because Roman households were the first mass consumers. Goods were manufactured in bulk and shipped around the Empire. Fine pottery was imported as a luxury item but goods such as wine and olive oil were transported in utilitarian vessels such as amphorae.

There was a busy town at Goadby Marwood which is where many of the finds displayed were found. Bronze jewellery was commonly worn by many levels of society and are common metal detectorist finds.

Roman coins replaced native ones and were used for everyday transactions in a similar way to today for the first time. However, coins were also hoarded or buried as offerings.

Evidence of Roman religious beliefs appear in the form of gods and goddesses on coins, figurines and jewellery.

Roman authority in Britain ended officially in AD 410 when the Roman authorities left the inhabitants to look after themselves in order to attempt to protect Roman rule on the Continent.

After the end of Roman rule in AD 410 Britain was subject to raids from peoples from North Western Europe – the Anglo-Saxons – who migrated and settled in Britain. Anglo-Saxon kingdoms were created in the 5th and 6th centuries and then united as the Kingdom of England under King Aethelstan in 957.

The Early Anglo-Saxons were pagan and cremated and buried their dead with grave goods such as weapons and jewellery. In the 7th century they were Christianised.

There are many beautifully crafted, high-status objects from this period found in the Melton area suggesting it was home to some very rich people.

During the 9th century, Britain was attacked and settled by Vikings with the area which is now Leicestershire falling into the Danelaw and subject to Danish rule. Items from this period either made or influenced by Viking styles have been found in the Melton area and complement the many Scandinavian place names found locally.

The Anglo-Saxon/Viking period came to and end with the Norman Invasion of 1066. 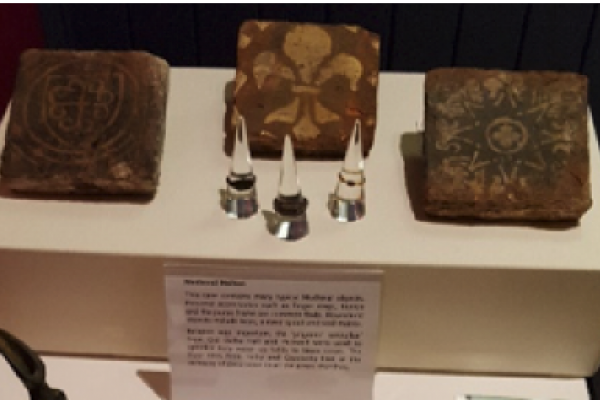